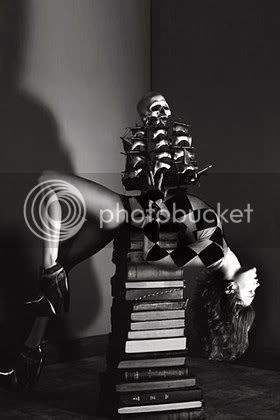 (image via the wit of the staircase archive)
4. The State of Constraint - New Work by Oulipo, by Paul Fournel, Harry Mathews, Jacques Jouet, Hervé Le Tellier, Ian Monk, Jacques Roubaud, Olivier Salon, Marcel Bénabou, Lynn Crawford, Frédéric Forte, Michelle Grangaud, François Caradec, Anne F. Garréta Oulipo is a name derived from Ouvroir de Littérature Potentielle; it's a school of literature devoted to employing mathematics and science to develop new literary structures. It's not as deadly as that may sound. Think of the joy of reading Lewis Carroll, whose work could not have existed in the absence of mathematics. One of my favorite authors, Douglas R. Hofstadter argues in Le Ton Beau de Marot (a book, by the way, which is actually written in English) that constraints can inspire creativity. In it, Hofstader discusses (amongst many other things) Georges Perec's La disparition, a lipogram, written without ever using the letter "e". The pieces in this anthology include similar word games, stories with binary structures (the literary equivalent of a choose-your-own adventure book), variations on themes, works based on the structure of classical music forms, "shattered" limericks, folk songs written by selecting four words from ninety Tom Waits songs, univocalism written with a single vowel, and so forth. Some have the same effect as reading puzzles or mind games, and some have more literary merit above and beyond the structure of the medium.

5. The Poetry Chains of Dominic Luxford - Ten Poets Pick Ten More And So On I haven't the patience to list all the poets. It seems I simply forget to read poetry. I have some on my shelves, but I don't seek it out. I never understood why my fellow students in schools would complain that poetry was obscure in meaning; I always found the meaning transparent, though perhaps less so with the most contemporary work. Also, taking a poem apart to see how it works, was something which appealed to the reductionist scientific mind (in a way I did not find with the dissection of the novel*). The conceit of this volume is that the publishers begin with five (allegedly) familiar poets and a poem, then request that the poet choose a second poem of their own and a third by another poet. Then repeat, so they gathered a series of chains of poems. I confess, I had only heard of the Canadians (Michael Ondaatje and Lisa Robertson). I do like the poems about something (as opposed to nothing), with the unexpected but apt image, and unsurprisingly, the magical realism of a penguin made of cheese.

6. The Bad Girl by Mario Vargas Llosa The interesting thing about this novel is the clear challenge Vargas Llosa has set himself, with his titular anti-hero the bad girl. How do you make your readers care for a woman who is not nice? Patricia Highsmith does this in her Ripley novels by making anti-hero Ripley the narrator - pure adrenaline gets you caught up in his schemes. In The Bad Girl, our narrator is Peruvian Richardo, who starts his life in 1950s Miraflores as a young adolescent, obsessed with Lily, the glamorous Chilean girl, who repeatedly refuses to be his girlfriend, and turns out not to be Chilean at all. It is merely a means for a poor girl to fit in, despite being different, by lying to disguise her differences as something exotic. Bookish Ricardo's only goal in life is to life in Paris, which is where he next meets the bad girl, through his Peruvian friend Paúl, cook and revolutionary. Now, the Bad Girl is Comrade Arlette, who using a free Cuban scholarship to see the world. Cuba wants to train youth to bring revolution to Peru - the bad girl just wants to see the world. Ricardo courts her again, but not wanting to hurt Paúl, does not help her avoid going to Cuba. So, motivated always to find riches and comfort, she finds herself a French diplomat to marry and gets herself back to Paris. Ricardo has set himself up as a translator and interpreter for UNESCO, by the time he meets the bad girl again, now a sophisticated French diplomat's wife. She deigns to have an affair with him, before moving onward and upward with her world-traveling social climbing, through the horsey-set in England, to yakuza Japan. Our likable narrator is frankly, a bit of a sap. The bad girl repeatedly abuses him, lies to him, berates him, but he remains obsessed. You care about Ricardito because of the way he behaves and the full friendships he has with a series of people in different eras of his life. The history of Peru is woven into the background of the novel. Vargas Llosa slowly builds the reader's interest in the bad girl - she is, if nothing else, true to herself, strong in the face of adversity (which she cannot help but seek out) and ultimately a product of injustices in socially and racially stratified society.

7. Ingenious Pursuits by Lisa Jardine Once again Jardine mines the (non-existent) scientific revolution; here making the case that science is culture. Beautifully illustrated, though the illustrations could do with some proper documentation. What the historian and the scientist find important in the history of science are not always the same thing.

*In Grade 9, I lost all respect for Miss F., English teacher, who thought it apposite to point out that when Atticus Finch shoots the mad dog in To Kill A Mockingbird, that 'dog' spelt backwards is 'God'. Just because it's true, doesn't make it worth observing.
Posted by minouette at 10:23 PM