Life has been extremely busy of late and I haven't had any time to update my blog, so I'm planning to make a big post about everything. You've been warned. I've opted for chronological, rather than any other sort of ranking, since I know how to do that.

Find my #naturalhistory #SciArt #mapart of #Canada #linocuts and block printed animals in minouette 's booth F🐸13 at #ooakx16
A photo posted by Ele Willoughby (@the.minouette) on Nov 24, 2016 at 8:32am PST

I did the full One of a Kind show this year. It was a busy, exhausting time! Thank you very much to everyone who stopped by to see me, purchased art and my fabulous friends and colleagues for all your great company and support! I have the greatest customers. I love that I sold art to the parents of burgeoning scientists, neuroscientists, geologists, paleontologists, historians, and all sorts of other fascinating people. And an extra special thank you to those who allowed it to happen; my husband and Dad the booth builder and installation team, my mom the chief babysitter, my trusty assistants Becca and Karla, volunteer sales help and excellent company Peggy and Carrie, carpooling friends Leslie and Queenie, entertainment and bingo queen Emma.

We had a nice Christmas here in Toronto with family.

First big announcement of 2017: the Toronto Etsy Street Team has a brick and mortar incarnation for the year. While our team mate, printmaker and friend Pam of Graven Feather gallery takes mat leave, we will be subleasing her gallery for the year! We'll be hosting art shows, pop-up markets, trunk shows, workshops and more all year long. We started with a launch paerty and mini show from team leaders on January 28th. You can still find my art at our 906 Queen St W location and stay tuned for more of our exciting plans (including my plans to curate a SciArt show this spring)! My friend Emma is taking the lead on this project and I'm glad that she has the gumption to convince me that we should do it!

That's me in my #studio in the #Toronto Star, Homes section talking about my #art, #science, #sciart and working from home. I'm holding my #honeybee #linocut #printmaking
A photo posted by Ele Willoughby (@the.minouette) on Jan 14, 2017 at 10:15am PST

My home, studio and peculiar combination of jobs and interests were the subject of this Toronto Star article. It's part of their series on people who work from home. It was pleasure speaking with them about my blend of art and science. Roger's rocking horse and hand built furniture for Gabriel were also a hit. (Geoscientists will recognize that 'general physics' should read geophysics, but it's a nice little article).

Reflections by Ele Willoughby. Linoleum block print with chine collé / 2017 / 8 x 15 in. / $180 (SOLD). On view in our LUNAR exhibit for @Printaustin through February 18th. This print stems from my experience of working at sea, where in the absence of light pollution, celestial bodies like our moon and even planets, cast bright reflections as far as the eye can see. Moonlight in turn, consists of reflections of sunlight (with some starlight and some earthlight reflected back at us). So the light on the ocean is reflections upon reflections. #art #science #sciart #exhibition #gallery #instadaily #science #artoftheday #graphic #fineart #instaart #atx #texas #art #artwork #moon #artistic #design #artnews #artshow #blockprint #instagood #illustrator #artist #creative #astronomy #visual #austin #printmaking #printaustin
A photo posted by Art.Science.Gallery. (@artsciencegallery) on Feb 2, 2017 at 11:09am PST

I am very happy to have a print in Art.Science.Gallery's show LUNAR, their official entry in PRINT Austin for 2017. If you're in Austin, you can still catch the show until February 18th. I'm also very happy to learn that their crowdfunding efforts were successful and the gallery will remain open for 2017.

Last, but definitely not least, a few of you will know, but last summer I applied to be an astronaut! Selecting Canada's next two astronauts is a year long process. I'm very proud to say that I am one of 72 people still in the running from 3772 initial applicants! There's a lot of testing still to go before they make their selections by August but it's very cool to be part of this amazing group of people. From this incredible talent pool they will have to narrow it down to two new astronauts. 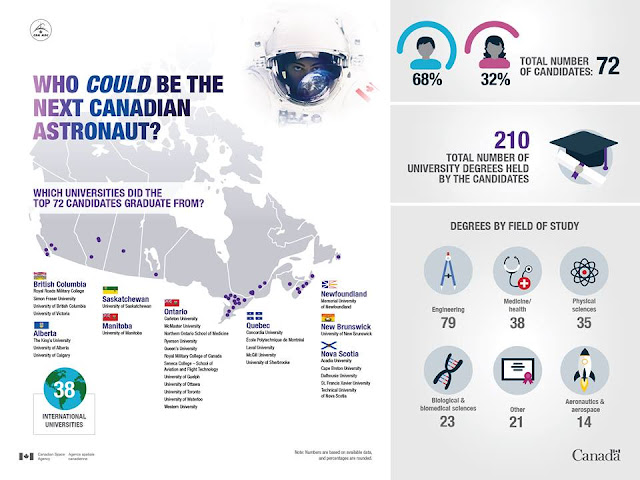 If you want to find out what I'm up to in closer to real-time, I recommend following me on twitter and instagram.

Posted by minouette at 4:20 PM No comments: