I've just printed a new edition of my portrait of quantum physicist Niels Bohr (1885-1962). One of his most famous contributions to quantum mechanics was the Bohr-Rutherford model of the atom. Bohr is shown next to the Bohr model of the Hydrogen atom (all the concentric circles are actually at the appropriate spacing, proportional to the n squared, which probably reflects on my sanity in some way). Bohr proposed that the orbits of electrons were somewhat like planetary orbits (though circular, and at specific quantized distances). To explain how orbitting charged electrons didn't lose energy and annihilate spectacularly with the so-called "spiral death" (physicists are big on melodrama, I'm telling you), he stipulated that perhaps they simply weren't allowed anywhere but the specific orbits. They could lower their energy state if excited by falling to a lower orbit, giving off a specific photon of a specific colour related to the difference between energy levels. This also explained how the spectra of gases had distinct, thin, spectral lines. I've illustrated this with the Balmer series - because it is composed of lines which are visible to the eye (H-alpha is red and caused by a jump from the 3rd to 2nd orbit; H-beta is cyan and caused by a jump from the 4th to 2nd orbit; H-gamma is indigo and caused by a jump from the 5th to 2nd orbit; and H-delta is violet and caused by a jump from the 6th to 2nd orbit). I've shown both the quantum jumps (squiggly arrows - squiggly lines are tradition for photons) and by the line spectrum below Bohr. 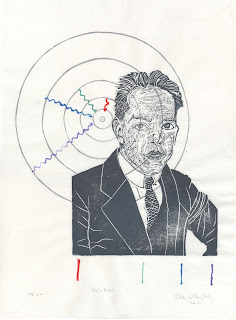 Confession: In the first edition, the model of the atom was behind him. It turns out that if your four year old beloved son/tyrant wakes you in the middle of the night and keeps you up for some time, you probably aren't with it enought to try and print a 6 colour linocut with a tricky registration. I didn't change this print based on an aesthetic decision. I simply messed up the layout but decided to run with it. I decided I like it this way.
Posted by minouette at 10:30 AM No comments:

The Matchbook Project Cabinet of Curiosities 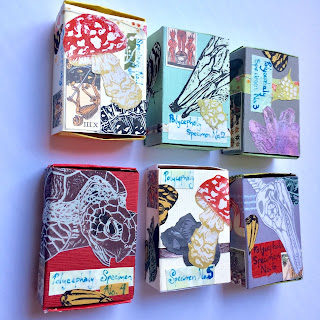 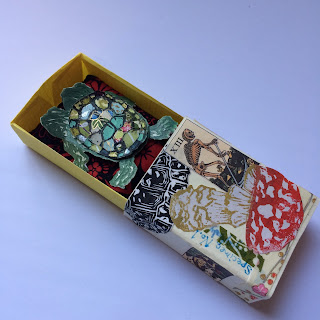 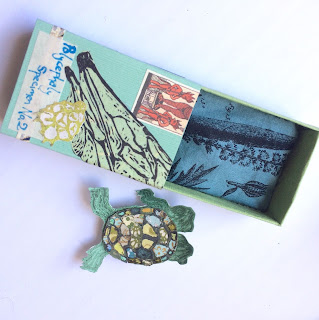 I am really pleased to be invited to take part in the The Matchbook Project, especially since the theme this year is Cabinet of Curiosities. This is a group travelling exhibit/artist exchange where all the participating artists make 10 tiny boxes (3" x 2" x 1") and their contents. You can see images of previous works in this project here or follow the #inventoryofmemorymatchbox hashtag on Instagram. Artists may decide to have similar matchbox covers and differing contents, but I decided to make similar contents and different covers. 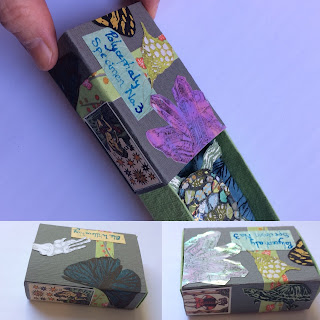 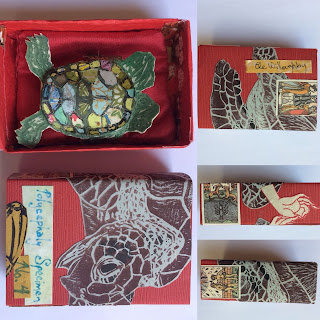 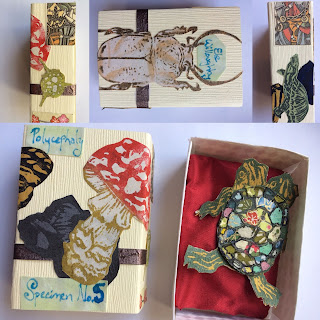 I returned to the idea of the two-headed turtle, for something which is both an example of natural history and something extraordinary which might fit in your wonderkammer. I carved two matching lino blocks for the turtle from above with the top of its shell and the turtle from below with the bottom of its shell and printed these on Japanese cardstock. Then I printed the shell itself on many different washi papers so I cold collage each section of the shell seperately.

I made the matchboxes themselves from Japanese cardstock in assorted colours, textures and sometimes with inclusions like gold and silver foil or silk fibres. Then I made assorted tiny pillows on which the polycephaly (two-headed turtle) specimen could rest. These were made in red silk or patterned cotton with a Japanese motif or botanical drawings (which fit with the cabinet of curiosity theme). 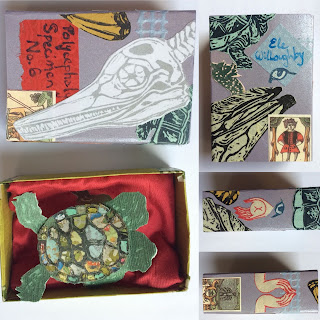 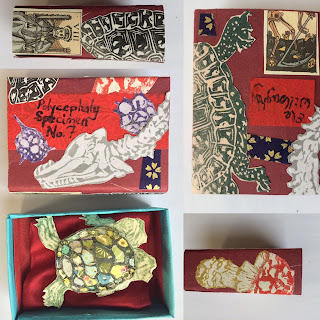 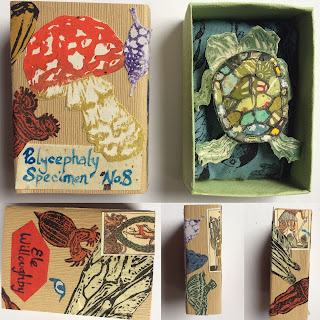 I collaged each of the boxes with all the bits of prints and proofs I've been saving so long: turtles on assorted washi, insect wings on delicate tissue, crystals on irridescent paper, beetles on washi, bees, radiolarians, fossils, mushrooms, butterflies and tiny vintage tarot cards from a beautiful sheet of paper I bought in Amsterdam many years ago. 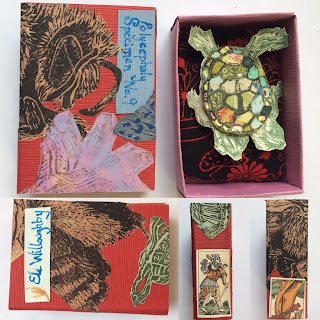 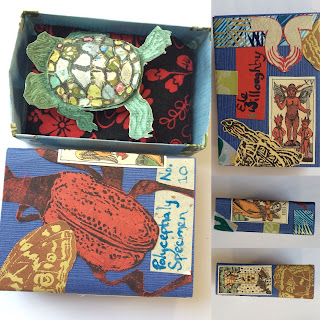 I had so much fun making these I think I'll make more. I'm planning to list a mystery box in my shop, so that you can purchase one and have the contents be a surprise!
Posted by minouette at 10:35 AM No comments:


Leprosy is a disfiguring disease which has afflicted people for millenia. Though her work was stolen and she died tragically young, we now recognize Alice Ball, the young black woman chemist, for her discovery of the first effective treatment for leprosy just over a century ago. Today we know that leprosy (or Hansen's disease) is a long-term infection of bacterium Mycobacterium leprae or Mycobacterium lepromatosis, which can usually be treated with a mix of modern antibiotics. It's likely however that leprosy is as old as human history and descriptions of the symptoms of the disease appear in ancient texts, including Hippocrates (460 BCE) and the Hindu scripture the Atharva Veda from 2,000 BCE. Signs of the disease have been found in skeletal remains from 2,000 BCE. Those infected may not show symptoms for as many as 5 to 20 years, which hindered our understanding of how it was transmitted. Sufferers develop inflammation of the nerves, respiratory track, skin and eyes, as well as skin lesions and can loose the sensation of pain in those areas. This puts them in danger of loosing extremities as repeated injuries, wounds and infection can go unnoticed. People wrongly feared that leprosy was highly contagious, and quarantined the infected in "leper colonies," a practice which persists in some developing countries. There has been significant social stigma associated with the disease, which disproportionately afflicts those living in poverty and and the term "leper" for a person affected with leprosy. Jack London in The Cruise of the Snark described a Hawaiian leper colony as ‘the pit of hell, the most cursed place on Earth’.

In the West, the traditional treatment for leprosy, like syphilis, was mercury, which is of course poisonous. In traditional Indian and Chinese medicine, the oil from the seeds of the chaulmoogra tree (Hydnocarpus wightianus) was used as a treatment. While the oil did indeed combat the disease, it could not be effectively applied. As early as the 1300s, people tried applying chaulmoogra oil topically but it was too sticky. The acrid oil usually lead to vomiting when taken orally. Since it is viscous and can't dissolve in water (or blood), when injected it merely clumped under the skin and the patients were left with rows of oily blisters, with skin resembling bubble wrap. The painful injections were described as "burning like fire through the skin." This partial and flawed, disfiguring treatment for a disfiguring disease was adopted in Western medicine in the 19th century and there were no better options until a 23 year old chemist, Alice Ball was recruited to study chaulmoogra oil in 1915.

Alice Augusta Ball (July 24, 1892 - December 31, 1916) was one of four children in a middle to upper-middle class, black family in Seattle. Her father was a newspaper editor, photographer, and a lawyer, her mother was a photographer and her grandfather was a famous photographer. As such, she grew up around chemicals and the magic of chemistry. The family moved to Honolulu while she was a girl, because they hoped it would help with her grandfather's arthritis, but he died shortly thereafter and they returned to Seattle. Ball studied chemistry at the University of Washington, earning a bachelor's degree in pharmaceutical chemistry and a second degree in pharmacy two years later. She published "Benzoylations in Ether Solution," in the prestigious Journal of the American Chemical Society with her pharmacy instructor, at a time when it was quite an unusual accomplishment for any woman, let alone a woman of colour, to publish in the peer review literature. She was offered various scholarships and opted to return to Hawaii to pursue her master's in chemistry, investigating the active principle of Piper methysticum (a medicinal plant known as kava  or ʻawa). She was both the first woman and the first African American to graduate with a master's degree from the University of Hawai'i. She also became the first Black chemistry professor at the school.

From 1866 to 1942, people diagnosed with leprosy in Hawai'i were arrested and quarantined on the Island of Molokai. Physician Dr. Harry T. Hollmann of the Kalihi Hospital in Hawai'i and acting director of the Kalihi leprosy clinic, was unsatisfied with using chaulmoogra oil in its natural form to treat leprosy patients and wanted to isolate the active ingredients. He recruited the graduate student Ball to help. Within a year, she was able to do what chemists and pharmacologists had been unable to do for centuries. She not only isolated the active ingredients but convert them to a form which could be circulated in the body. By taking the fatty acids present in the oil and exposing them to an alcohol and a catalyst, she produce ethyl esters which are soluble in water, and hence could effectively be injected. My print shows how she formed the ethyl ester of chaulmoogric acid (the acid plus alcohol produces the ethyl ester with water). This breakthrough was so significant, she was offered an instructor position in chemistry at the university. By 1922, her method was widely used to prepare chaulmoogra oil, and patients would might have been subjected to exile, a life of regular painful injections and being trapped in quarantine were instead being effectively cured and discharged!

Tragically, Ball did not live to see the affects of her research. She became ill during her research and returned to Seattle for treatment. She may have been exposed to chlorine gas while demonstrating the use of a gas mask in case of attack (as WWI was raging), but the cause of her death is unknown. Her death certificate was altered and lists tuberculosis as the cause of death, at age 24. She had yet to publish her results when she met her untimely death.

The chemist and president of the University of Hawaii, Arthur L. Dean completed and published her study - but he did not give Ball credit for her work, calling it the "Dean Method"! Dr. Hollmann objected and published an article documenting how the technique should in fact be known as the "Ball Method". The Ball Method relieved the thousands of patients removed from the homes in Hawai'i, forcing their families to hold funerals before their exile. Ball's Method was the preferred treatment for Hansen's disease until the advent of antibiotics in the 1940s. Despite Hollmann's efforts to defend her legacy, Ball's achievements did not receive much recognition until historians learned of and highlighted her work in the 1970s. Almost 90 years after her discovery, the University of Hawai'i finally recognized her work with a plaque on the school's lone chaulmoogra tree in 2000, and the Lieutenant Governor  declared February 29 "Alice Ball Day," now celebrated every four years.

Posted by minouette at 2:52 PM No comments: