So Reynardin is worried about what the technocrats are up to. She worries about near-armaggedon when we destroy civilization as we know it, but some survive. She likes her iPod and assorted other amenities, and though she has a good conception of what they do, she could not make one from scratch. Well, I found her a tee-shirt for a different, but yet not-entirely-dissimilar concern: what if you find yourself back in time (a little harder to reconcile with physics as we know it, but nonetheless): 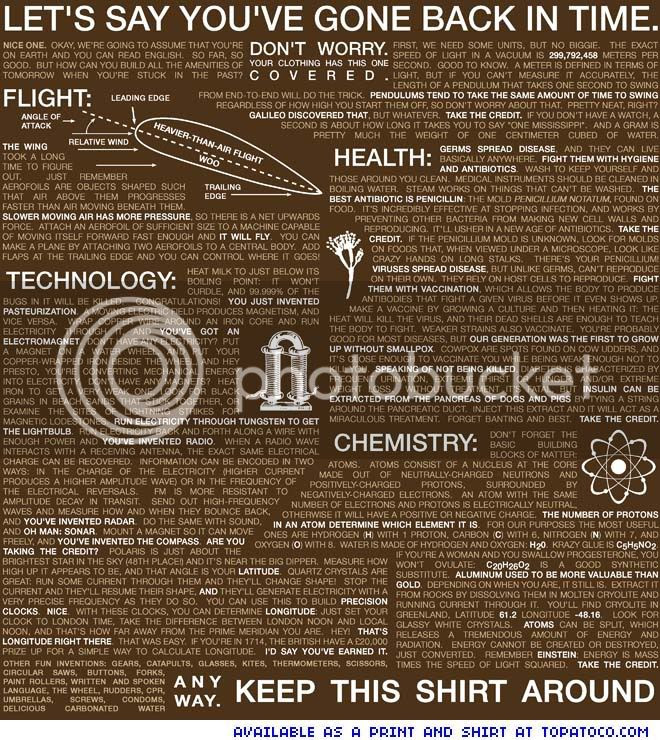 See, there you go. Just carry a cheat sheet.*

Now, if you could solve my evil-cashmere-eating moth invasion issue, we will call it even.

On an counter-productive note (because, after all, what could be less conducive to easing technological angst, and fears about what exactly are the technocrats up to, than giant robot spiders?), here is some footage of the 12-meter (40-ft) tall, 37-ton mechanical spiders was observed in the red brick warehouse area of Yokohama last Friday.

Now, I would say, "Only in Japan," however, since these steampunk giant spiders are made by La Machine of Nantes, France, that would be untrue. [via Pink Tentacle]

*The tip about Polaris being the brightest star and marking true north depends on time and how far back you go (further, it is none-too-helpful in the Southern Hemisphere)... but since we don't believe in time-like loops and rather doubt that time is two dimensional, it's rather moot.
Oh, and that icon of an atom is so early last century. Electrons come in clouds, not little orbiting things with precise locations.
Posted by minouette at 2:05 PM