I haven't been blogging as much as I am usually wont to do these days. It's hard to find time for everything, with busy Mr. Monkeytoes around. But, I've been given a little nudge by the lovely and hilarious Michelle of thunderpeep. She asked me if I would take part in a Blog Hop. It's like a round robin, but with blog posts. No, that's not quite it... we don't make people battle it out. Um... it's like a spread the love to your fellow creatives pyramid scheme... or something. So each participant writes about their nominator, answers some questions and then tags two more people to keep the whole thing moving along. She tagged me here.

I first 'met' Michelle online through Etsy and then later in person. She was moving from Vancouver to Toronto and she wanted to find the local Etsians and join the Toronto Etsy Street Team right away. It wasn't always easy to find people who would participate, especially when we were a smaller team. This, clearly, was someone who was engaged in the Etsy and arts community. She was itching to join while still four provinces away. Plus, we had the transplanted Ontario girl moves to BC for a few years only to return to Toronto thing in common. So we cleverly welcomed her and quickly recruited her to team leadership, in one of our smartest moves ever. Michelle is a graphic designer with a newspaper background, growing her online business to be her full-time gig. She also knows everything you need to know about printing artwork. I love how we managed to get a leadership team for TEST with all these complimentary skillsets, serendipitously. I confess there was no master plan... but our instincts were right. We not only got a great leader for our team, Michelle does all the graphic design for TEST.  You'll recognize her distinctive style from the TEST blog.

Often, what I most admire, are things that I couldn't or wouldn't create myself. So while I often go for colour and patern in a big way, and have a style which is fairly naturalistic with a lot of lines and texture, I really admire artists who have mastered symplicity and economy of line. And, I don't know if it's obvious to others or not, but I'm completely obsessed with typography. I have dozens of books on the subject. So I really enjoy her work, from the somehow magical Arctic animals (Scandinavia is what you might call her spiritual home, an inspiration from folklore, to flora and fauna to design - hence, the trolls) to the typography of cards with her trademark humour, sass and pop culture references.

And now, the questions.

1.What are you writing/working on?
We're both working on making the flagship show of the inaugural trans-Canadian Etsy: Made In Canada pop-up market extravaganza a show to remember - which runs smoothly. It's only 10 days away now and you should all come join us at MaRS, or your nearest show on September 27th. It should be a great show! That's been keeping me pretty busy. I'm also working to prepare for the Christmas One of a Kind Show! RJH has been building prototypes of parts of my booth. We're planning hard, plywood walls, framed in wood and debating the merits of different shelving, lighting and flooring solutions. He even built me a wee diorama at 1/12th scale. He thinks it's hilarious that I printed out scale models of my framed prints. 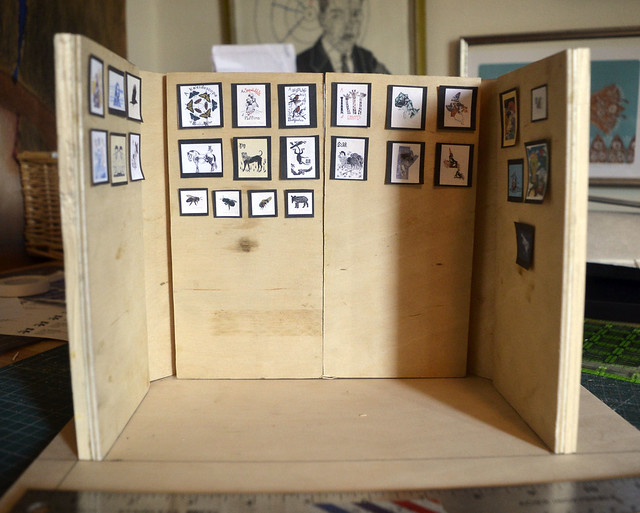 I've also got several print series on the go, including: scientists, my biology imaginary creatures mini prints, the collaged block prints with multiple Japanese paper and other ephemera, my terms of venery series and more.

2.How does your work differ from others in your genre?

Somewhere along the line I think I developed a distinctive style. I often have a subject which sort of floats against a blank field. This comes, I think, from absorbing a lot of Japanese art at a formative age. I recall pooring over an encyclopedia of Japanese art, which I could barely lift, when my father brought it home from Japan when I was three. On the other end of the complexity scale I have prints with elaborate inking schemes. The whole idea of inking à la poupée where different areas of a single block are inked in different inks (as if you were a tiny doll with tiny brayers, I guess) is very freeing for me. It allows me to make multi-colour prints without having to make reduction prints or carving multiple blocks. Likewise using chine collé (which comes from the French expression for glued Chinese paper... and means using small pieces of delicate added papers to add colour and texture to regions of a print). Also, there are the more multimedia collaged block prints, where I print onto and collage printed papers. This satisfies my desire to just luxuriate in a sort of bohemian clash of paterns, and excuses my fantastic hoard of paper and ephemera (ahem). But, in any case, I think you can recognize the prints as mine: having my lines, shapes and textures. I'm getting quite good at fur, if I do say so myself. Perhaps most telling is the choice of subject matter. I do really think of my work as a wunderkammer. I am trying to gather exotic natural specimen, in print form. The terms of venery are about taxonomy as well as a love of words and type. I do think that one should make art of one's own time... so I am interested in depicting things which haven't been depicted before, including say, previously unknown microscopic, prehistoric, or underappreciated creatures. Last, but not least, I am making my own, opinionated, history of science. My own knowledge of and love for science makes my work unique.
3. Why do you create?

Not creating is not an option. I really am driven to create. It's a need and I don't ever recall a time it was any different.

4.How does your creative process work?

I always have ideas on the go. I do make a lot of series of things, which I think works well for prints. I use a lot of photographic references. So, when I choose a subject, I do some research and look at a lot of images. Sometimes I work on the images - very badly and inexpertly - in Photoshop. Then, I draw the image in reverse on to lino and plan how it would work as a print (what is positive, negative space and how it will be coloured). I like the soft artist's lino. I carve away the negative space, pulling the odd proof as I go. Sometimes, when removing material, less is more, so it's important to know when to stop. So proofing is important, cause you can't go back. When the block is done, I cut Japanese paper for an edition. I ink the block and place my paper on top. I burnish my prints using a baren, as one would with a traditional Japanese moku hanga woodblock print. Using Japanese papers and a baren means I can work in my own home, without a press. It also means I can use beautiful Japanese papers.


Now, let me introduce two creatives who inspire me with their work.


Carolyn Eady of Sprouts Press Designs is another local on our team. She's a bookbinder and printmaker. You probably can guess how I feel about books. As well as literature, I love books - the physical books themselves. I've made some of my own, and even took one of Carolyn's workshops (which she graciously offered to her team mates, in our first art/craft skills-based workshop). She is one of the artists I know who does come out and share her knowledge and help others. She makes objects of beauty, simplicity and honest craftsmanship, with real playfulness with the medium. Her entry in last year's 'In the Round' show at Graven Feather, was one of the most original... a sort of deconstructed circular book.

I love the idea of wearing your books:


You can find all sorts of different types of books in her shop:


I wanted to also profile someone who isn't a Torontonian, whom locals may not know. My friend Tanis is awesome. I first met Tanis Alexis Laird online, on Craftster, years ago, when I lived on Vancouver Island and she lived in Vancouver. She was an artist seeking to learn more about physics, since she was working on a series of paintings about particle physics. I was a scientist needing to make more art. We became friends... though it was harder to manage to meet up in person than you might imagine. I didn't meet her in real life until I'd moved back to Toronto, and came to Vancouver for my job. (She's since moved with her family to the Island.) Tanis is an immensely talented fibre artist, painter, multimedia artist, artisan and all around good person. When I joined Etsy she was Captain of the Trans Canada Etsy Team, and I thought how lucky I was to know someone who was important for Canadian sellers (and I'm sure she'll get a hoot from that). She's not only someone who rallied and organized Canadian Etsy sellers, she's the sort who maintains an international network of artist friends and is more engaged in trying to make the world a better place for all than pretty much anyone I know. She makes all sorts of different beautiful things. You can find her work on flickr,  her blog and on society6. I love having her art in my home!


I love the multimedia combining drawing, painting and sewing.

Posted by minouette at 9:26 PM

I love that you printed mini minouette prints for your mockup. It's quite genius, complete visualization of your booth. Plus it's fun ;)
Thanks for playing the blog hop game, and introducing us to Carolyn (who's work I already love) and Tanis - her work is gorgeous!

Thanks Michelle! Though slow, I enjoyed taking part in the blog hop and I'm really pleased to introduce people to new-to-them art!