This Wednesday, July 26 from 1:00 pm to 5:00, I will be demonstrating my process of making linocuts with hand-printed, collaged Japanese washi papers at the Japanese Paper Place. This 'Washi Wenesday' is a free demo - one held the last Wednesday of every month - and you can drop in and see me work, see examples from portfolio and chat about printmaking and paper! Stop in (103 The East Mall Unit 1, Etobicoke, M8Z 5X9) and say hello!

The Japanese Paper Place has the most amazing warehouse of Japanese papers, both handmade and machine made. They supply the Paper Place on Queen West, as well as working directly with artists and selling papers online. I'm looking forward to doing a demo because I find teaching in any way is always instructive, and allows me to think about my own process. Also, it's a chance to seek the perfect paper for ideas in my head!
Posted by minouette at 11:44 AM No comments: 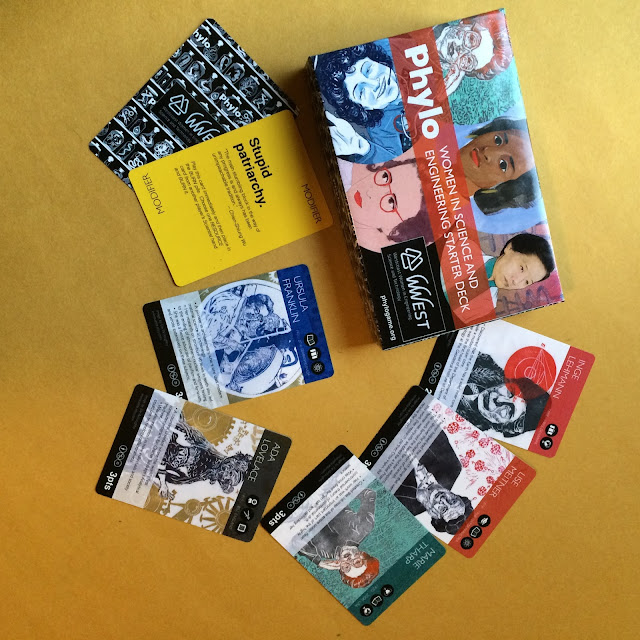 Definitely my favourite commission of 2016, was making and submitting five of my portraits of women in science for the Phylo Women in STEM trading cards. Dave Ng, a biologist at UBC got started with educational trading cards upon reading a study that children can identify more Pokemon than local flora and fauna. Struck by this idea I submitted my fox print when the project was getting started and shared some information about it. This latest set brings attention to women in science and technology, throughout history, and the hurdles facing women and under-represented groups. How can you not love a game with 'Stupid Patriarchy' cards? He told me he had seen my blog post about the death of physicist, material scientist and archeometry pioneer Ursula Franklin and it encouraged him to include her, as a great scientist, role model and Canadian. As you can see, I've also illustrated marine geologist Marie Tharp, physicist Lise Meitner, seismologist Inge Lehmann and proto-computer scientist Ada Lovelace. I'm flattered to see my art is in wonderful company with works by several other artists and science-artists. The sets are available from Phylo and you are even free to download and print your own!
Posted by minouette at 9:00 AM No comments:

I confess I have mixed feelings about spiders. Generally, I leave them to mind their own business. But, I follow a lot of scicomm (you know, science communication) and seem to have fallen in with a bunch of very friendly Twitter entomologists. They're a subset of the biologists. For information and contagious enthusiasm for spiders, I recommend @Cataranea. As a result I consume a lot of science journalism and learn about a wider variety of creatures than I would have known existed. So, somewhere I stumbled upon the peacock spiders, and these are a group of spiders that you can't possibly fear. For one thing, they are beautiful. For another, they dance. This is a hand-printed lino block print of the colourful Australian Coastal Peacock Spider, Maratus Speciosus. Like the name suggests, peacock spiders have vivid, patterned, multicolour abdomens (and that round opisthosomal plate) which males lift and shake, along with their third pair of legs, during a courtship display. That is, much like peacocks, the males do a fancy dance to impress the lady spiders! Unlike other peacock spiders, the males of the Maratus Speciosus also have a set of bright orange hairs (setae) along both edges of the opisthosomal plate, only visible during the courtship display, as shown in this print.

In a recently delightful science communication exchange amongst scientists on Twitter, spider specialists identified the mysterious jumping spiders raining down in an astronomer's office. One mentioned that their amazing eye tubes actually function like Galileo's telescope! Before you knew it astronomers were doing some quick calculations and together they made realization that jumping spiders can see the moon! (You can read more by great science journalist Ed Yong in the Atlantic). The funny thing for me was I read this exchange while it was happening and I wasn't sure it it appeared on my feed because of the astronomers or the entomologists I follow. I've seen it claimed that Twitter scicomm is "inside baseball" with scientists communication amongst ourselves. My own experience is more "baseball adjacent" if you will. Most people are involved in science in some way, but networks are much broader than traditional scientific networks within a field of study and there is the posibility for great cross-pollination like this whimsical story.

Happy birthday to astronomer Henrietta Swan Leavitt (1868-1921) who set the scale of the universe when she found the period-luminosity relationship for Cepheid variable stars. These pulsing stars in the Cepheid constellation (shown) can be used as "standard candles" allowing astronomers to determine distances to celestial bodies.

This entire month, we're hosting Canada 150+ at the Toronto Etsy Street Team gallery, with a brief, but cool hiatus this week hosted by Tosca Teran, with events for a book launch of Suffed - Taxidermy for a New Generation by Divya Anantharaman & Katie Innamorato. On Thursday there will be the Carnival of Taxidermy book signing, 5 pm to midnight. Friday through Sunday there will be a series of related workshops (Entomology 101: Morphos & Jewel Beetles, 2- headed Chick Taxidermy and Fascinator/Wearable Taxidermy- check her site for availability).  If you come by you can see my prints of Canadian provinces and territories and all sorts of art and handmade goods. 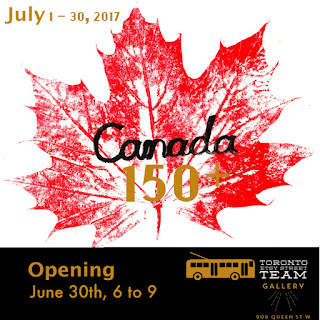 Posted by minouette at 3:33 PM No comments: