I'm working on my series of women in science protraits for the show in the fall. The latest in my scientist portrait series is American astronaut Mae Jemison. Astronauts are generally extraordinary, but I love that not only was she a trailblazer, she is someone with twin passions for art and science, who danced professionally, was well as being a chemical engineer and medical doctor.


Mae Jemison (born October 17, 1956), is a physician who became the first African American woman to travel in space when she went into orbit aboard the Space Shuttle Endeavour for NASA, on September 12, 1992. She also has a B.S. in chemical engineering, served in the Peace Corps, is a dancer and choreographer, formed and runs her own company researching the application of technology to daily life, and even appeared on Star Trek: The Next Generation. Inspired to join NASA by Nichelle Nichols, who portrayed Lieutenant Uhura on Star Trek, she was the first real astronaut to appear on any Star Trek show.

Jemison is a Professor-at-Large at Cornell University and was a professor of Environmental Studies at Dartmouth College from 1995 to 2002. As well as her own company the Jemison Group, she founded the Dorothy Jemison Foundation for Excellence with projects like The Earth We Share (TEWS), an international science camp for students, ages 12 to 16, and biotech company BioSentient Corp.
Posted by minouette at 4:13 PM No comments: 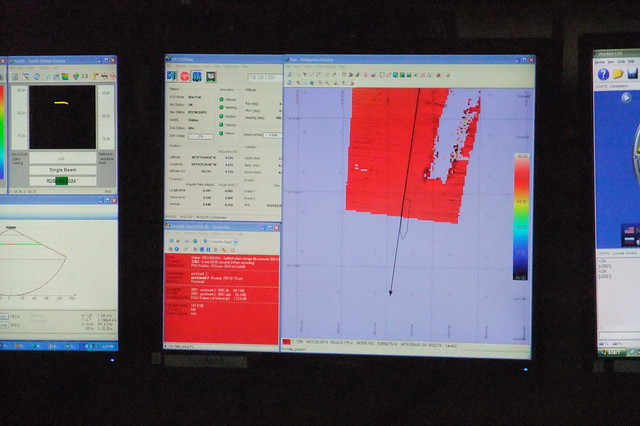 I meant to post his yesterday, but I ran out of time.

In the early morning fog of 29 May 1914, the ocean liner RMS Empress of Ireland was steaming down the St. Lawrence on its return trip to England, just offshore Rimouski, Quebec, when it collided with the Norwegian collier SS Storstad, or more precisely, when the Storstad collided with her (though there is evidence to suggest both Captains made errors of judgement). Both Captains should have known to maintain their headings due to the dense fog - both, it seems did not. Of the 1,477 persons on board the ship, 1,012 died, making this the largest of any Canadian maritime accident in peacetime, and second only to the the sinking of the Titanic at the time - though now something largely forgotten by most Canadians. The Storstad did not sink. 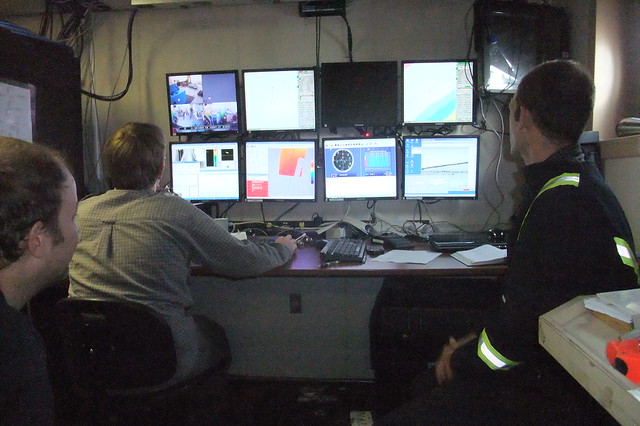 The immense lost of life was not a failure to provide lifeboats or a design failure like the Titanic, but a combination of where she was struck, a failure to close watertight doors and the fact that so many pothole windows were left open to try and air out staterooms, despite maritime regulations requiring them to be shut once the vessel left port. The ship went down rapidly. 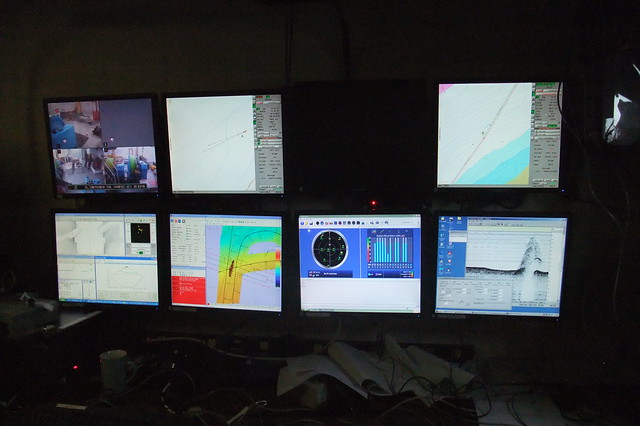 While doing fieldwork sailing to and from Rimouski in 2010, we allowed another research group some shiptime to test their multibeam bathymetric system. The RMS Empress of Ireland make a logical target in just 40 m of water. Seeing the undisturbed wreck apear on the screens in the lab was really a fascinating experience.

On the surface, there was nothing to see but river and fog, and the one buoy to warn of a shallow obstruction. Below, clear as day on all our screens were bright reflections on the depth sounder and multibeam screens, indicating hard surfaces. It was so unusual to see straight lines, and in fact, the clear outline of a ship, despite the near century of sediment build up, decay, and any incursion of life. Most of what we see has the organic, smooth lines of naturally formed and eroded geology. Even when we do see human-made objects (like our own equipment), it's never so large that you can read its very shape. It was haunting to see the clear outline of the Empress, silently lying on the seabed. 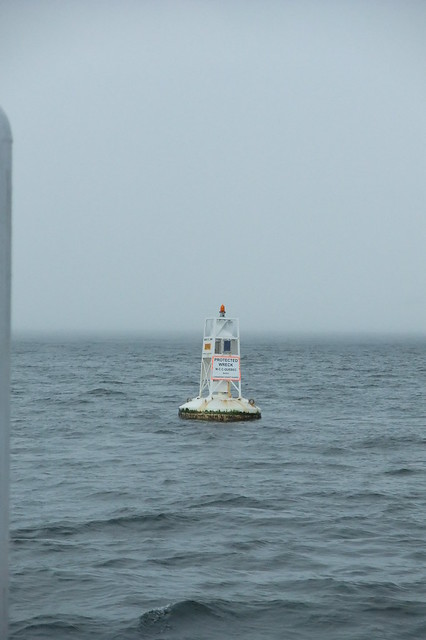 The St. Lawrence is deceptive. In French, we have the word Fleuve to better describe this mighty river which drains into the sea. We do say 'seaway' in English... but river is insufficient. While sometimes calm, the waters are brakish, the tides surprisingly large and the currents stronger than you would imagine for a protected river. I certainly made sure my porthole window was shut. But, a cruise liner is filled with passengers with little to no experience of being at sea. In the dense fog as we surveyed, it was easy to imagine the chaos, especially in the early morning dark. Many passengers may not even have awoken. The story of the sinking, and subsequent inquiry makes for some dramatic and in fact scandalous reading.

The crew of our vessel viewed the ship somewhat solemnly, not so much because they felt the connection to events of a century previous, but because more recently, the wreck itself had claimed more lives. In only 40 m of water, skilled scuba divers can explore it. But in cold water with low visibility, it is a dangerous dive. In 2009, the year before our survey, six divers had died.
Posted by minouette at 9:25 AM No comments: 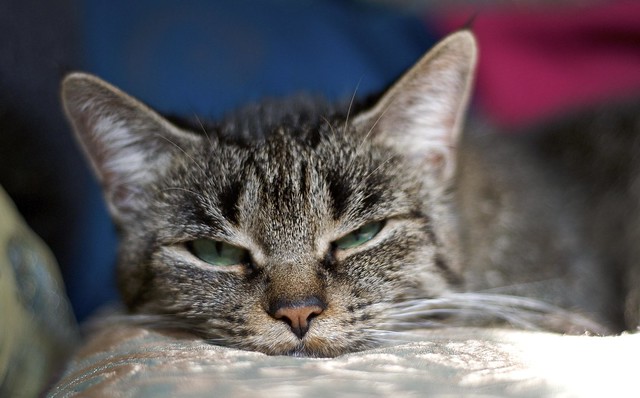 I haven't posted much lately, because baby - and now cat. Our beloved, if persnickety cat Minouette is getting to be a certain age for a cat. She is 17.5 years old. She started demanding a lot of water. Then we noticed puddles of clear, odorless liquid in the kitchen, which we did not immediately recognize.  We thought she had spat up, as cats do. It turns out that these are common symptom in older cats: peeing on things, especially cool, flat, surfaces like kitchen tiles, and drinking excessively. The odorlessness confused us. After a couple of trips to the vet, we've discovered she is diabetic. This is serious, but it is a liveable disease, and there is no sign she's in distress. It could have been worse. We were scared we would get a diagnosis of kidney failure, and it was stressful waiting for her test results. Cause, we love that damn cat. So, she's now on a high-protein diet and gets insulin twice a day, subcutaneously. I'm happy to report that I am able to administer the insulin, despite my anxiety about needles. I can't even watch someone get an injection in a movie, but luckily these needles are so small that I can handle it.

On the flip side, she decided to pee directly into the air vent in the kitchen, which is bad news for us. 'Odorless' is a relative term. RJH turned the heat on the other day (it's been that sort of spring) and guess what? Even watered down cat pee sure stinks when heated. We have done all we can to clean the vent, but we may have to tear down the ceiling in the basement and replace the vent altogether. Worst of all, while she is adjusting to the diet, and barely notices the injections, she has kept up the wayward peeing.

Also RJH and I got some terrible cold, from my nephew I think. RJH actually took some time off and he never does that... so that tells you how dreadful it's been. I just hope the baby doesn't get it!

To top it off, our internet was down for the better part of 2 days, which may be a mere 'first world problem' but it is a bother.

That's an older photo of Minouette, above, by RJH, but it's one of my favorites.
Posted by minouette at 2:57 PM No comments: 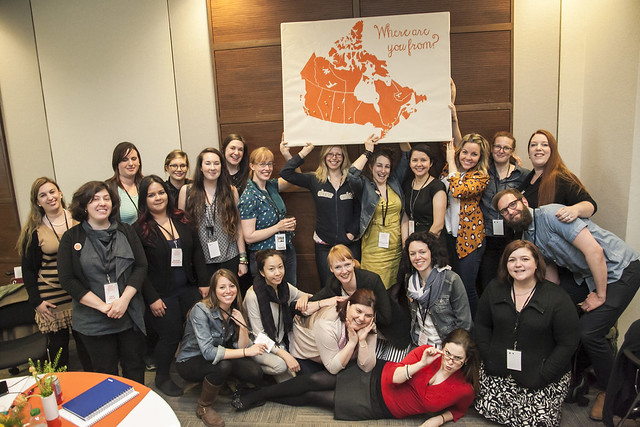 It was a busy week! Monday and Tuesday, along with Etsy admin, sponsors and team captains & leaders from across Canada, I took part in the Etsy Summit at MaRS. In fact, Etsy invited me to give a short talk about how to grow your team, and lead some break-out group discussions too. I started my talk by apologizing for not sticking around for extra meals and maybe being a little distracted, since this is the first time I left Gabriel with a sitter (Mom) and logical or no, it's part of the job description of a mother to worry. (I joked Tuesday that I wasn't sure if I should be relieved or hurt to find him happy and relaxed when I got home.) I got a lot of positive feedback, so I think I managed to give a good talk despite any concerns or distractions. The meeting was a success - we have some exciting plans. We're working on a pan-Canadian extravaganza! September 27, there will be simultaneous marketplaces in 30+ cities from coast to coast, called 'Etsy: Made in Canada'. You can read more on the TEST blog. I think it's a great idea to actually gain some national attention.

The rest of the week was filled with some doctors appointments for baby (who is healthy and "robust", thank you, it turns out). Apart from that, I had another birthday, so there was sushi and multiple chocolate cakes. There was some actual sunshine on Mayday, so we managed to go outside, which is great, because most years it rains. RJH has been busy photographing (and playing in) a charity hockey tournament, and the baby and I are just taking it easy.  I think we'll just eat cake and giraffe toes, respectively, and maybe take some photos with my exciting new camera. If it stops raining, we might go watch the bonfire down the street, but it's nice some days to have no bigger ambitions than cuddling.

Posted by minouette at 3:50 PM No comments: