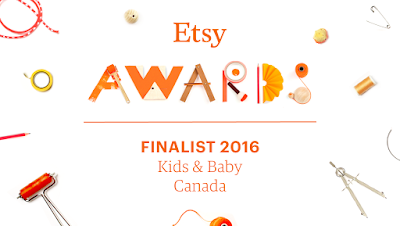 I hope you're having a fabulous Victoria Day! I had a wonderful surprise this morning. I've been selected as one of the @EtsyCA #EtsyAwards finalists! My linocut Tardigrade stuffie is in the running in the Kids & Baby category! 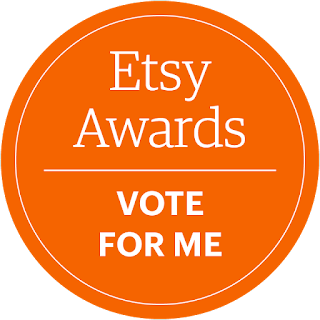 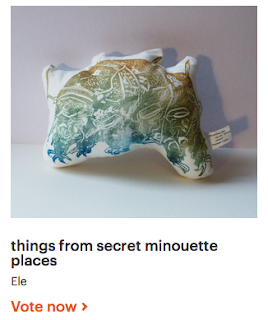 I hope you'll vote for me! You only get one vote, but you'll want to support the nearly indestructible, microscopic water bear (or if that isn't cute enough, the moss piglet). Ever finalist is in the running for the Community Choice award, worth $10,000!

Posted by minouette at 3:32 PM No comments:

It's been a busy week! Yesterday I had the unusual experience of a book launch in the afternoon followed by an art opening in the evening. Quite coincidentally, it was a bee-themed day. The City of Toronto hosted their official launch of their the latest titles in the biodiversity series, including the 'Bees of Toronto' at City Hall. In the evening, 'Bees (& the Birds)' opened at Graven Feather gallery. I've also been busy with meetings with Etsy and our Etsy: Made in Canada venue as well as copious behind-the-scenes planning. And, much to my surprise, I licensed my Taurus constellation linocut image as the album art to a Hungarian indie band!

I might not have gone to City Hall, but I was tickled by the idea of having a day where I could swan around from book launch to art opening, and was intrigued to meet some of the others involved in this great series of books. I think the City does have reason to be proud that they have manage to bring together a this collaboration with natural historians at the Royal Ontario Museum, as well as local academic scientists (particularly from York University for the bee book), the Toronto Public Library and the TDSB, as well as artists, writers and other contributors. I got a chance to meet some of the researchers involved, as well as artist Charmaine Lurch. When we got to talking, I figured out that I have seen her bee sculptures at Nuit Blanche. Because the world is very small, we also figured out that we have a couple of friends in common in Sarah Peebles (who got me involved in this book in the first place) and Christine Pensa (who curated the bee show as well as being part of our TEST & Made in Canada team). Charmaine ended up walking with me from City Hall to Graven Feather and we talked about balancing family life with working in the arts, whether my experience avoiding corrosion at the bottom of the ocean could help her make more weather-proof wire sculptures and some of the great projects she's working on including an illustrated historical novel set in Toronto, and bring STEAM teaching into the schools using both her bee works and knowledge and also talking about Henrietta Lacks and HeLa cells.

Some of the biologists who were at City Hall also came to the art show and I heard that Prof. Packer (who leads the bee lab at York) approved of the message of my piece. It was very crowded so while I managed to speak with his wife (a bird researcher) he actually gave a friendly thumbs up from across the room. 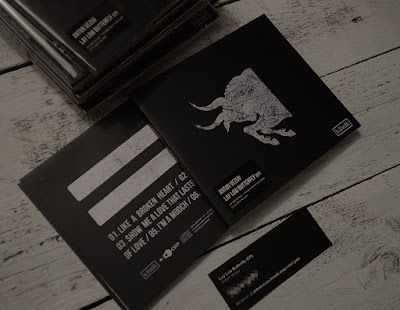 Last week I was contacted by singer Gyulai István of the Hungarian indie band Anton Vezuv. They wanted to use my Taurus constellation for their cover art for the new album Lay Low Butterfly. We had quite a lot of conversation back and forth, because they were working on a very short time line and sometimes international wire transfers can be more complicated than you would imagine. Anyway, I checked out their music (some of which is in English and is perhaps what you would imagine) and liked what he had to say about my art, including


yes, well, bull is usually visualized with head down. like your artwork. because bulls are fightin like this. BUT, with heads down they look kinda sad and vulnerable also. so for me this figure show strength and sensitivity. that's why I wanted a bull figure, and our producer found your artwork somehow, and it has a cool style, kinda handmade-vintage-illustration stuff which fits to the art concept.

so I'm pleased to be involved, and I love the idea of my art making its way out into the world and into unexpected places, like schools in Toronto, or albums in Budapest.