I've been planning a series of six local bees (both native bees, and common transplanted bees) and chose a bumblebee. I recently discovered that I had previously (and inadvetently) selected a common European bumblebee (lacking peer review of the science behind my art) and decided I would make another bumble protrait, this time of ­the Common Eastern Bumblebee, or Bombus Impatiens. 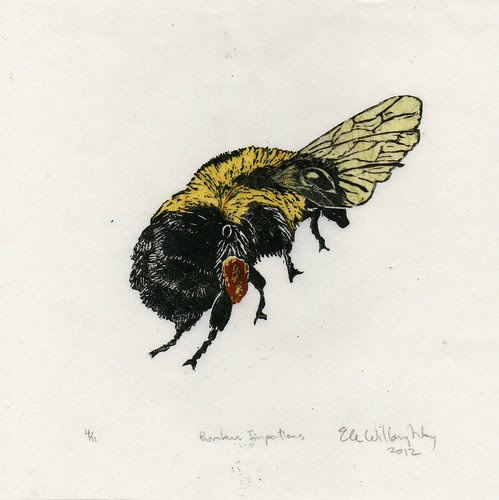 If you live in eastern North America you may recognize this guy. It is yellow on its upper thorax, with a black spot in the centre of its back, and is black on the lower abdomen. I wanted to capture the round, fuzzy bee in flight and show how unexpected proportions of the bee make it appear as round and cuddly as an insect could be. Bumblebees are social insects that are characterized by black and yellow body hairs, often in bands. This hair comes in soft (long, branched setae) pile, that covers their entire body, making them appear and feel fuzzy. Like their relatives the honey bees, bumblebees feed on nectar and gather pollen to feed their young. This one has orange pollen on its fuzzy leg.

Posted by minouette at 4:15 PM